Showing posts from June, 2004
Show All

June 12, 2004
A week ago, a nasty incident left two women buried under the rubble when a building collapsed in St. Paul's Bay. A site was being excavated next door. The reason for the collapse has yet to be investigated.

Yesterday afternoon, two wardens were diverting traffic from the direction of Xemxija going towards Veccja, and asking motorists to take the bypass. The road a bit further uphill past Veccja restaurant was collapsing..........yet again.

The problem started last year when an old building was torn down to make way for an apartment block. The obvious happened when all the buildings further uphill and across the road exerted too much pressure down the clay slopes and onto the road, which then, as now, was already excavated and exposed along the other side. A thick wall was built to counter this downward pressure, however one year on this wall is also giving in.

Yet a couple of years earlier, part of the bypass also collapsed, and indeed a section of it is today still reduced to one…
1 comment
Read more
June 09, 2004 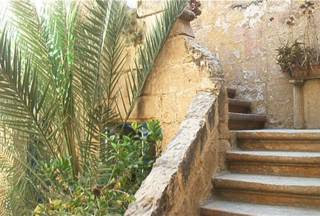 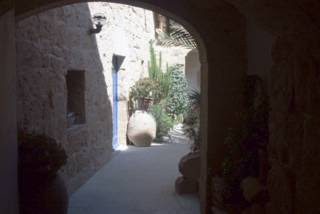 Typical entrance to the courtyard of the same house as shown in the top photo.
Post a comment
Read more

June 03, 2004
Several times in the course of a month, I am contacted by companies or individuals looking for commercial properties to rent or buy.

It is very obvious, and everyone usually agrees, that the nature of one's business is a very important factor and usually determines, and in many cases limits, one's final selection. A retail company will seek passing trade. A legal office, clinic or accountancy firm would usually go for easy parking and easy access, with the exception of cities like Valletta or Sliema. However in the past years, there has been a great increase in IT businesses, or similar companies who do not see the public face to face, but communicate via modern technology.

Here in Malta, perhaps more then other countries, it is very important for such companies to take into consideration a few very vital points, which are:

1. Distance from the nearest sub station, and telephone exchange. Positioning your office far away from these sources will increase your chances of fallin…
Post a comment
Read more

June 03, 2004
One of the disadvantages of living in a new property is that unless you enjoy open views from your window, there's little evidence as to where you are in the Mediterranean.

The interior stone walls and lack of central heating or double glazing would probably shed some light as to your latitude on the map. However the ceramic floors, painted walls,square rooms and resin staircases are all standard.

This is one of the reasons why more and more tourists visiting Malta are opting to live in older traditional properties for their vacation.

They want to be reminded they're abroad and on holiday even when they're indoors.
They want high ceilings, long narrow windows with lovely wooden shutters, beautiful patterned floor tiles and wrought iron ballustrades.
They want to look out of the back window and see a low skyline and a clear sky.
This is the typical southern Mediterranean architecture they can only dream of back home.

June 01, 2004
The rental market on Tower Road Sliema has been changing ever since the Portomaso project neared completion.

The future doesn't look any much brighter with the MIDI project targeting 2005 for completion of it's first residential units. Tower Road prices have had to be revised downwards, and more stubborn landlords have been left perched on the fence.

Foreigners renting on the island are having more and more choice at hand, and the first properties to be axed off their lists are those with shabby furnishings or with dilapidated common parts and creaking lifts.

Gone are the days when lessors gathered any unwanted bits and pieces of furniture at home and furnished their rental flat with them. Back then, choice was limited and anything rented fast. Summer short lets were fast and furious. Snap up the property now or sleep on the bench tonight sir!

Today the cost of furnishing an apartment has gone down considerably, and the standard of finishing has also shot up. Gypsum walls, fitted …
4 comments
Read more
More posts