A ‘mysterious’ concrete balcony protruding from the Għar Lapsi coastal cliffs enjoying unobstructed views of Filfla is there to stay, as according to the planning watchdog there is no “solid evidence” to issue an enforcement order.

Completely concealed from land, the structure is only visible from the sea. It was flagged a few weeks ago by environmentalist Alan Deidun, who posted a photo on his Facebook account.
While questioning the legality of what he sarcastically described as “a room with a view” he questioned if this was yet another audacious attempt to have a property in a privileged location.

A close up of the concrete balcony captured by Planning Authority staff during a recent inspection.
“Seems like constructions within cliffs themselves have become the next frontier,” he remarked.
Comments below Prof. Deidun’s post claimed that the ‘balcony’ was connected to nearby boathouses next to the Għar Lapsi public convenience.

This newspaper asked with the Planning Authority to verify if the structure was covered by a development permit and if an enforcement order had been ever issued.
In his reply, a PA spokesman noted that the options available were limited as the development might have been there for decades, possibly before 1967.  By law, structures build before this cut-off date which are visible on the 1967 aerial photos are considered legal, regardless of their location.

Read the full article on The Times of Malta (Published October 7, 2016)

Popular posts from this blog

June 26, 2018
Regulations will prevent fire incidents from escalating
The Civil Protection Department is in the coming weeks proposing a number of fire safety regulations for apartment blocks.

The measures follow recommendations in an inquiry led by Magistrate Joseph Mifsud following a fire at 77 “Waterways” Flat 3, Triq l-Aħmar, Marsascala, during which a man had lost his life. Six people had also been hospitalised.

They include that fire drills led by the administrator should be carried out in every apartment block, that each block should have fire extinguishers u fire blankets at a place that was visible and accessible and that there should be a smoke and fire detection alarm in the common area.

Other proposals are for emergency exit signage, easy accessibility to roofs, and that callers to emergency number 112 should give as much information as possible and identify a landmark for a faster response time.

These, the CPD said in a statement, were some of the measures that could be taken to …
Read more

The Lament of the Maltese Townhouse

The Malta Independent on Sunday printed an Opinion piece by Marisa Micallef, (Chairman Housing Authority) under the title "Ode to a dying Abode".

The Lament of the Maltese Townhouse


"I am baffled, confused, hurt.After all, I’m a good-looking townhouse, double-fronted (although that works against you these days because apparently I’m more suitable for redevelopment into flats that way), built and brought up in a well-located street in Sliema.

My stonework is now a bit grimy, my blue shutters faded and sunburnt and windswept to a nondescript grey. And I even once boasted a smart gallarija and pretty carvings too.So why on earth are these grey, badly dressed, pot-bellied guys putting some white, plastic-covered note on my side to say I’m going to be pulled down and replaced with more ugly flats? That’s all I can see around me anyway – ugly flats.

Why am I not worth keeping, I wonder? Why am I not loved anymore?I remember being carefully and lovingly built by hand by craftsmen …
Read more 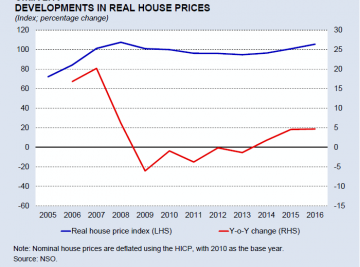 Property recovers to pre-crisis highs
Prices up 4.7% in 2016

Property prices in 2016 grew by 4.7% compared to the previous year, recovering to the pre-crisis peak, according to a report issued today by the Central Bank of Malta.

However, the CBM said there was no cause for alarm about affordability
as the ratio between the median house price and households’ income remained significantly low when compared to the boom period of 2005/2006.

The bank said there were two reasons for this: the fact that incomes were rising, and the fact that pressure driving up prices was mostly generated by foreigners seeking jobs in Malta.
The CBM noted that in response to the higher demand, supply was also expected to increase in the near term, as the number of permits issued by the Planning Authority almost doubled in 2016 – although not to the pre-crisis peak.

Meanwhile, the bank repeated its Real Estate Market Survey among real estate agents, a larger share of whom expressed their view that residential prop…
Read more